On August 6, 1991, British physicist Tim Berners-Lee at CERN in Switzerland published the first ever website, the WorldWideWeb (W3).

By the end of 1992 there were ten websites online and, after CERN made the W3 technology publicly available on a royalty-free basis in 1993, the internet gradually started to grow into the all-encompassing giant that it is today.

By 1994, there were close to 3 thousand sites, one of which was a fledgling Yahoo! which, originally called ‘Jerry and David’s Guide to the World Wide Web’, started its online life as a web directory.

By the time Google came onto the scene there were over two million websites. 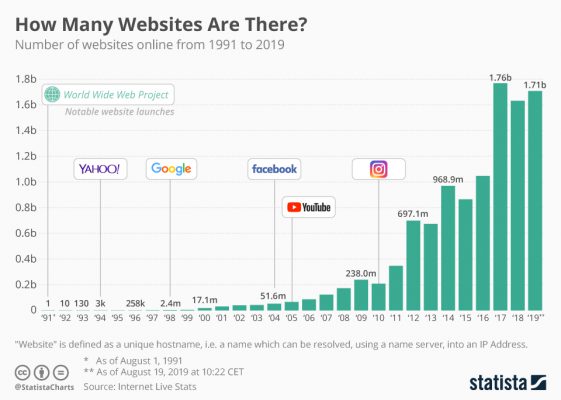 As Statista’s infographic shows, today there are 1.71 billion, and looking at Internet Live Stats’ counter, despite being lower than 2017’s 1.76 billion, this figure is currently increasing at a fast rate.